– the subterranean corridors of Jirkov are emblazoned by legends which say they connected the town to far away places. They are unique evidence of the town's 16th century boom. They were excavated near a significantly larger excavation site – the alum-slate mines, located to the north and east of the town. The original reason for building the cellars was to protect documents, goods and food in case of fire. One such fire devastated Jirkov in 1555, and then the cellar works started in a location between the present streets Tyršova and Vinařická. Shortly, the townsmen discovered that the cellars offered ideal conditions for beer storage and fermentation. From then on, the cellars were associated with the renowned Jirkov beer brewing.

Between 1555 -1596, a network of corridors with up to 150 niches and chambers were built. These were hired out to townsmen and merchants. The cellars also played a defence role in history. It was mainly during WWII when the Wehrmacht chose the cellars for their headquarters.

Subsequently, the cellars lost their importance for the town over the following 70 years. Therefore, they were closed and only entered by young adventurers. It was only the danger of land slides which made the town administration take measures. The cellars were reconstructed in cooperation with experts and then opened to the public (in 2007).

This valley spreads out from the northern edge of the town

along the Běla rivulet up to the dike of Jirkov reservoir. It is an ideal location for hiking or cycling trips.

A mountain village situated 3 km to the north-west of Jirkov. There are many timber-framed houses, typical for this region. The centre is dominated by a newly reconstructed belfry.

The Chapel of the Virgin Mary in Vinařice

The chapel with an onion-domed shaped turret used to be situated in the centre of the village, nowadays it is on the edge of the village. The town of Jirkov had the chapel reconstructed in 1994 and it was re-consecrated in 1996.

The National Nature Reserve (NPR) Jezerka lies on the borders of two administrative districts - Most and Chomutov. It is situated about 1.5 km south-west of the Jezeří chateau and 1.5 km north-east of Vysoká Pec. The protected area of the reserve comes to 141.94 ha and it is the largest in the district of Most. The Nature Reserve derives its name from the Jezeří mountain (705.5 m) the peak of which is the highest point of the protected area.
This rocky mountain top belongs to one of the most attractive places of the Most District part of the Ore Mountains. It offers breathtaking views of the opposite Jedlová hora mountain, the Vesnický potok valley, and Jezeří reservoir, but also less cheerful views to the south - of a landscape destroyed by open-cast mining of lignite which, far on the horizon, passes into the mild and pleasant landscape of the Žatec region and the Czech Central Mountains.

On the eastern edge of the mountain village of Květnov,

between Blatno and Březno, there is a pilgrim church of Visitation of the Blessed Virgin Mary with a re-consecrated Madonna statue. 3km to the east of Květnov, in the direction towards Jirkov, there are ruins of the Neustein castle, deserted as far back as in the 15th century. 474 659 460, e-mail: farajirkov@tiscali.cz, www.jirkov.farnost.cz 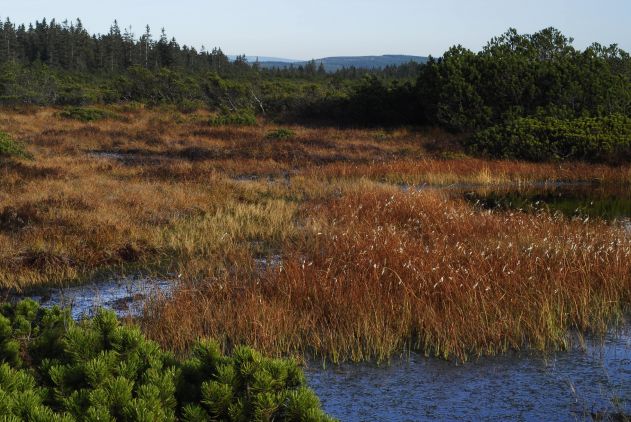 Nature reserve extending over 377 ha situated on a platform near Jirkov and Chomutov in the vicinity of Kalek. The peat moor with many lakes and mountain pine tree growth is the largest and best preserved moor in the Ore Mountains. It is open to visitors and an ideal destination for a cycling or hiking trip.

- is considered the largest baroque style edifice in Europe.

In its prime, it was a well known cultural centre which hosted theatre as well as music performances. It used to pride itself on a magnificent garden, game reserve and a chateau park (only the so called "arboretum" has survived until the present time).
The chateau was held by the aristocratic family of Lobkowitz until WWII. During the war, the Nazi army established a prison for captured higher-ranking officers of the opposing armies (so called Schloss Eisenberg Prison) in the premises of the chateau. After the war, the building was used by the Czechoslovak Army. It was devastated and badly maintained. The damage is still visible and by and large not repaired until the present time. The chateau is situated at a height of 387 m, on a rocky promontory overlooking a vast open-cast mine approximately 3 km from Černice village. The chateau terraces used to offer magnificent views of the beautiful surrounding landscape. The view you can see today is less fascinating - nevertheless still interesting. It shows how easily mankind can destroy landscape by open-cast mining activities.

Visit the all-year recreation resort Lesná situated in the Ore Mountains. The Lesná Hotel offers accommodation and restaurant. The nearby tourist information centre Lesenská pláň offers information on interesting trips, local sights and planned events. The Ore Mountain Museum hosts a permanent exhibition showing traditional life of the mountain inhabitants 100 years ago. Not far from the hotel, there is an arboretum with original tree species of the Ore Mountains, Geo-park with exhibition of typical minerals of that area, an outdoor educational summerhouse and a children's playground with wooden elements. The Museum is open daily. At the weekends it offers the services of a professional guide. The admission fee is optional. The maintenance of well kept cross-country ski tracks is financed from a project called The Ore Mountains White Track. For more information on this resort visit www.horskyhotellesna.cz, www.vrclesna.cz, www.horskyklublesna.cz

A hill visible from far away, Růžový vrch (729 m), looms over the eastern part of the Hora Sv. Kateřiny village. On top of the hill, dominating the village, is the reconstructed, 16 m tall stone view tower. On top of the tower, there is a web camera which transmits the current view of the surrounding area online.