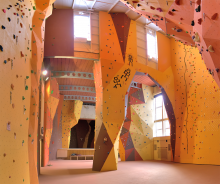 There is a building of "many faces" situated in Ervěnická Street. Characterised by a mixture of smells and sounds; the smell of perspiration mixing with the nice odour of good-quality coffee accompanied by the tones of lively music - it is a place where men and women overcome the limits of their physical abilities several metres above the ground.

The former Municipal House of Culture was reconstructed in 2013 and changed into the contemporary Climbing Arena. A place dedicated to Great Balls and dances now hosts sport-minded people who can climb as high as 13 meters. However, the music has not stopped resonating in the walls of the building; the non-smoking café, which is a part of the Arena, often invites local groups to perform.

The arena features 50 climbing lines and 150 climbing routes including boulder routes.  Every climber can find here what they need; from slightly leaning profiles through perpendicular routes up to demanding overhanging routes. Various events are organised such as competitions or climbing marathons. It hosts children from climbing clubs and pupils of local schools.

The arena has its own café which offers pleasant and interesting ambience. The café does not serve only the climbers, it is open to the public, too.