The Château Červený hrádek is situated 2 km north of Jirkov,

at the foot of the Ore Mountains. It is a reconstructed, early Baroque château with a characteristic monumental staircase at the front.

The building is decorated with statues by, among others, Jan Brokoff who was employed here in the second half of the 17th century. A game-preserve and a vast park are situated near the château. In the park, there are many exotic plants such as the huge magnolia situated at the main staircase.

The following areas of the château are currently open to the public: the chapel, the Mirror Hall, the picture-gallery, the study of the last holder of the château, Max Egon Hohenlohe-Langenburg, and its adjacent rooms. The most impressive part of the castle is the Knight’s Hall (also open to the public) that is two floors high and decorated with rich ornamental plasterwork. The riding-hall houses an exhibition of air-warfare over the Ore Mountains during WWII. The château became the property of Jirkov town in 1996. It has undergone extensive reconstruction. In 2006, the town of Jirkov established here a holiday 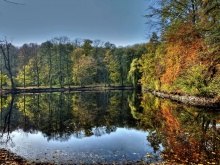 The château is a sought-after location for wedding ceremonies and receptions, cultural and social events and regular exhibitions. The château also houses a restaurant, hotel and a training centre.

The former villa of the family of Karel Kludský junior,

the director of the legendary inter-war circus, became the seat of the Municipal Library on May 2010. The legendary reputation of the circus and its menagerie is commemorated by the theme playgrounds in the adjacent park and by a small museum situated in the villa. The entrance gate is dominated by an arch with the statues of a lion and lioness.

The Town Hall is a two-storied building in a late 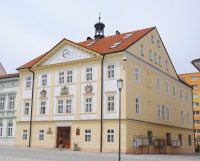 classicist style from 1840. The façade is decorated with the coats of arms of Jirkov, the Austro-Hungarian Empire and the noble families of Rottenhahn and Buquoy. These days, the building houses the municipal office. 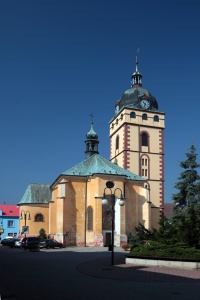 The original church dates back to around the year 1300. It was rebuilt in the 16th and then in the 18th century when it received its Baroque appearance. The church is open during religious services or upon agreement with the parish office.

A stone tower was built adjacent to St. Giles Church 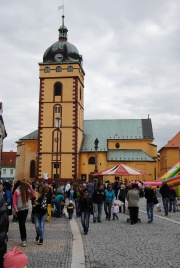 in 1540-1545. It was used as a watch tower. The Neo-Gothic, five-storied building offers amazing views of the Ore Mountain range and the Czech Central Mountains from its 25 meter high viewing gallery. Entry is provided by the Town Information Centre.

The unique network of historical cellars, most of which have been preserved, was dug in a sand-stone hillock in the years 1555 to 1595 under the command of Kryštof of Karlovice, the, then, holder of Červený Hrádek and Jirkov manor. This intricate subterranean system was in use from the 16th century on as a brewery and town cellars. The German army (Wehrmacht) military headquarters were situated here during WWII. The cellar system is the oldest of its type in The Czech Republic. 850 metres of the corridors are open to the public.

The Plague Pillar of the Virgin Mary of the

The pillar was erected by the townsmen in 1695 in remembrance of enduring 30-Year's War horrors. It was originally located in the main square. In 1965 it was moved near St. Giles church. It was made by the famous sculptor Jan Brokof. 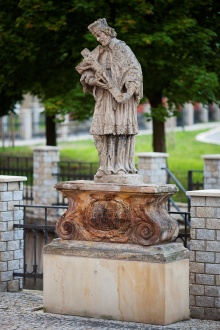 The St. John of Nepomuk Statue

The work of Jan Brokof dating back to 1708, situated in Nábřežní street by the river Běla.

Fountain in the Square of Dr. Edward Beneš

A sandstone public fountain was built in the middle of the square in the 18th century. It has been reconstructed several times and these days it is fully functional. 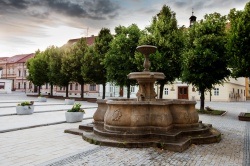 Presently the Na Růžku pub, situated on the corner of Vinařická and Tyršova street, was originally an empire style inn from the 18th century. It is the last house in Jirkov which is still connected to the system of historical town cellars.

One of the town’s oldest preserved buildings. It has a renaissance core and an alcoved portal with an ornamental cartouche dating back to 1617.