The cinema has re-opened in autumn of 1994. Mr. Ing. Miloš Kubelka has been in charge of the cinema since January 1996. The building is leased from the town of Jirkov. The town also subsidises the energies and a part of the operating expenses. The operation would be impossible without such subsidy. 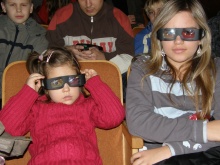 The admission to film shows costs approximately 65 CZK; 45 CZK for Sunday's children shows. There is a so called "Family day" once every two weeks. Parents obtain a 10% discount if they come with their children.

The cinema was recently significantly modernized. It is one of the best ones in the region due to a good acoustics and a modern DOLBY DIGITAL EX technology.

Other modern technological feature is a digital data projector that is utilized for commercials and for other independent film presentations. The digitally controlled stage lights are used during various concert, theatre plays, lectures, and dancing shows.

In August 2009, new flooring was laid and the seats were replaced by broader and more comfortable ones.